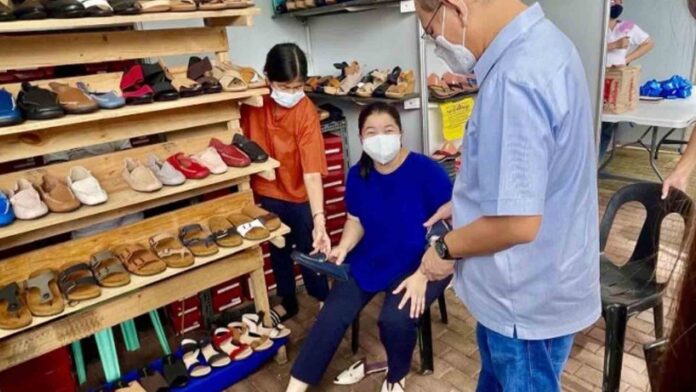 The city government of Marikina on Monday officially opened its Christmas Shoe Bazaar to help the local shoe industry recover from the impact of the coronavirus pandemic.

Marikina City Mayor Marcelino “Marcy” Teodoro led the opening of the bazaar, which will run until January 15 at the Freedom Park, right in front of the City Hall.

A total of 40 manufacturers composed of footwear and leather goods makers participated in the bazaar.

The bazaar showcases quality, affordable, and durable shoes, bags, belts, and other products made by Marikina’s skilled craftsmen.

The prices of products sold at the bazaar range from as low as PHP100 to PHP2,500.

In 2020, the city government called off the annual shoe bazaar due to restrictions brought about by the Covid-19 pandemic.

Teodoro said the bazaar showcases the ingenuity and craftsmanship of Marikina shoemakers and manufacturers.

He also expressed hope that the 6,000 shoemakers and craftsmen in the city who were displaced by the pandemic will be able to recoup their losses.

To help local shoe manufacturers recover from the ill effects of the health crisis, Teodoro also encouraged the public to patronize footwear and other locally made products made by skilled craftsmen of the city which is known as the Philippines’ shoe capital. (PNA)